Perometers work with parallel-acting light curtains made of photosensors and light-emitting diodes (LEDs) with which the limb is illuminated and scanned. The actual measuring unit is installed in the frame, which is pushed over the limb. 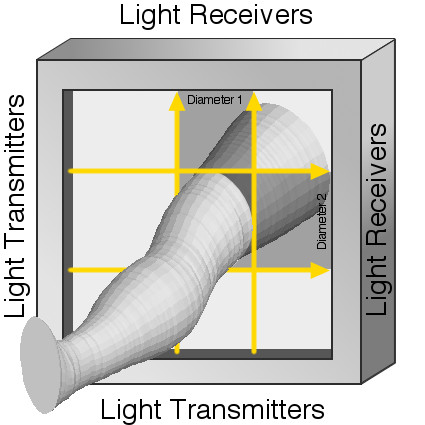 From the recorded measurement data, the new Perometer software PeroScan creates an interactive 3d representation of the extremity. Volume changes are visualized by a colour scale applied to the interactive graphics. The qualitative pre-evaluation of your measurement data thus becomes revolutionarily simple.

As an example, the rotatable graphic on the left shows the leg of a test person during a muscle build-up lasting several weeks: The basis are two measurements taken at intervals of approx. 6 weeks. The red colour indicates an increase in the affected area. It can be seen easily that the thigh volume has increased, but not the calf volume.

Perometers are optimized for easy handling.

Operation with a conventional PC allows simple monitoring and control of the imaging unit. The measurement data are automatically stored, managed and evaluated in a clear manner. For further use Perometer data can be exported into other programs such as word processing programs or other standard software.

This website uses cookies to improve your experience while you navigate through the website. Out of these cookies, the cookies that are categorized as necessary are stored on your browser as they are essential for the working of basic functionalities of the website. We also use third-party cookies that help us analyze and understand how you use this website. These cookies will be stored in your browser only with your consent. You also have the option to opt-out of these cookies. But opting out of some of these cookies may have an effect on your browsing experience.
Necessary Always Enabled
Necessary cookies are absolutely essential for the website to function properly. This category only includes cookies that ensures basic functionalities and security features of the website. These cookies do not store any personal information.
Non-necessary
Any cookies that may not be particularly necessary for the website to function and is used specifically to collect user personal data via analytics, ads, other embedded contents are termed as non-necessary cookies. It is mandatory to procure user consent prior to running these cookies on your website.
SAVE & ACCEPT